5 of the Most Impressive Granite Sculptures In the World 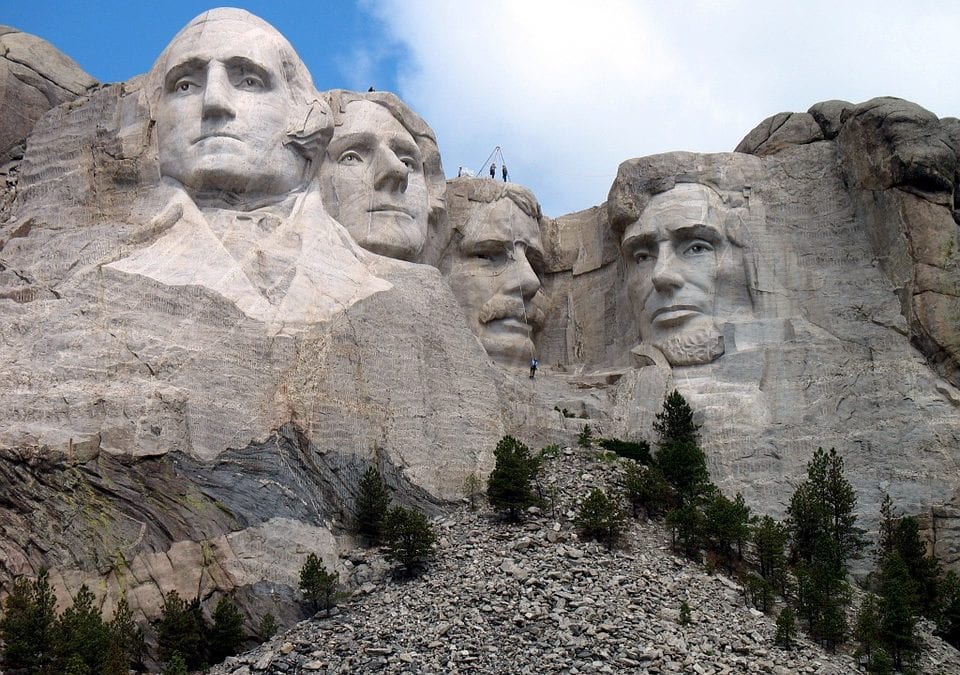 People have been carving into granite for thousands of years. From small gravestone memorials to entire cliff faces carved and sculpted, granite is as synonymous with durability and longevity as it is for elegance and beauty. Take a brief world tour of some of the largest granite monuments ever carved.

Arguably one of the most impressive granite monuments in the world, Mount Rushmore stands a mind-blowing 5,725 feet in the air (that’s over a mile!). The faces of Washington, Jefferson, Roosevelt, and Lincoln took about two years to design and carve and were chosen because they best symbolized the preservation, foundation, and expansion of the United States. Interestingly, the monument was originally going to be made on a nearby granite cliff called “the Needles,” but the granite there was determined to be too thin to support carvings of such enormous size. As it stands, each face is roughly 60 feet tall, but the original plans called for each president to have a full bust from the waist up. Some people worry that the monument will erode over time if the national park doesn’t take extra care to maintain it, but when the sculptures have been analyzed, they show almost no signs of erosion at all.

Unless you’re a history buff or world traveler, you probably don’t know a whole lot about the teardrop-shaped country located just south of India that is only a little bit bigger than West Virginia. To the people who do know it, Sri Lanka is famous for its tea, wildlife, spices, and the oldest tree planted by a human (over 2,300 years old!). It is also home to a large granite deposit that was carved into a statue of Buddha in the fifth century. This statue shows Buddha standing more than 40 feet tall and is so intricately carved that you can see the folds in his clothing. If you’re worried about it pitching forward, you can rest easy: the statue is held in place by a piece of granite that connects the carving to the rock from which it was carved.

The Great Pyramid in Giza was constructed of granite and different limestones. The granite was probably quarried from the Aswan stone quarries that were situated south about 580 miles from the Great Pyramid site. Most likely these slabs of granite were ferried up the river on large barges, though archaeologists aren’t 100% sure how they did it. With a slab that huge and heavy, wouldn’t a standard barge flip over when getting loaded? If they used some kind of crane, how did they operate it? The world may never know.

If you visit the area today, you’ll also find an unfinished granite obelisk that Egyptians were presumably carving out of the ground to make into a massive monument. The astounding part is that it looks like they were trying to carve the obelisk as one piece and then lift it out of the ground, which yields another baffling question: if the finished obelisk was estimated to weigh 1,200 tons, how on Earth did they intend to do that? Once again, the world may never know.

Standing over 155 feet tall, the Alexander Column was completed in 1834 as a commemorative marker of the Russians winning the fight against Napoleon’s armies in 1812. Alexander I was emperor at the time, and the base of the pedestal has a plaque that reads, “To Alexander I from a grateful Russia.”

This monolith, a column made of a single piece of stone, was quarried from red granite in Finland and shipped by sea to Saint Petersburg. On the top is a statue of an angel whose face looks incredibly similar to Alexander’s face that is holding a cross. Weighing in at a monumental 661 tons, the builders had it standing upright in just under two hours, and its sheer weight and size made securing it to anything else unnecessary.

Princess Diana, also known as the Duchess of Cornwall, was beloved by people across the world for her kindness, open-mindedness, and love of children. The fountain’s fabrication started in 2003, and the granite was quarried from Cornwall and shipped to Ireland, where it was cut and polished using some of the most advanced techniques of the time.

In 2004, the Princess Diana Memorial Fountain was dedicated in her honor and used the natural slope of the park to get the water from the top to the bottom. One side of the fountain has steep steps and curves to make the water dance and gently splash, and the other side is generally smooth sailing with some shallow ripples cut into the granite. Princess Diana was well-known for having some turbulent aspects of her life, in addition to all of the good that she did, and the fountain’s creators wanted to incorporate that into the finished design.

Hats off to those who can craft granite into art—it’s a very hard type of rock and very difficult to carve. As a result, it doesn’t usually carry the same level of detail as other mediums. That said, its strength also allows it to withstand the elements so many generations can enjoy its beauty and the emotions it can evoke.