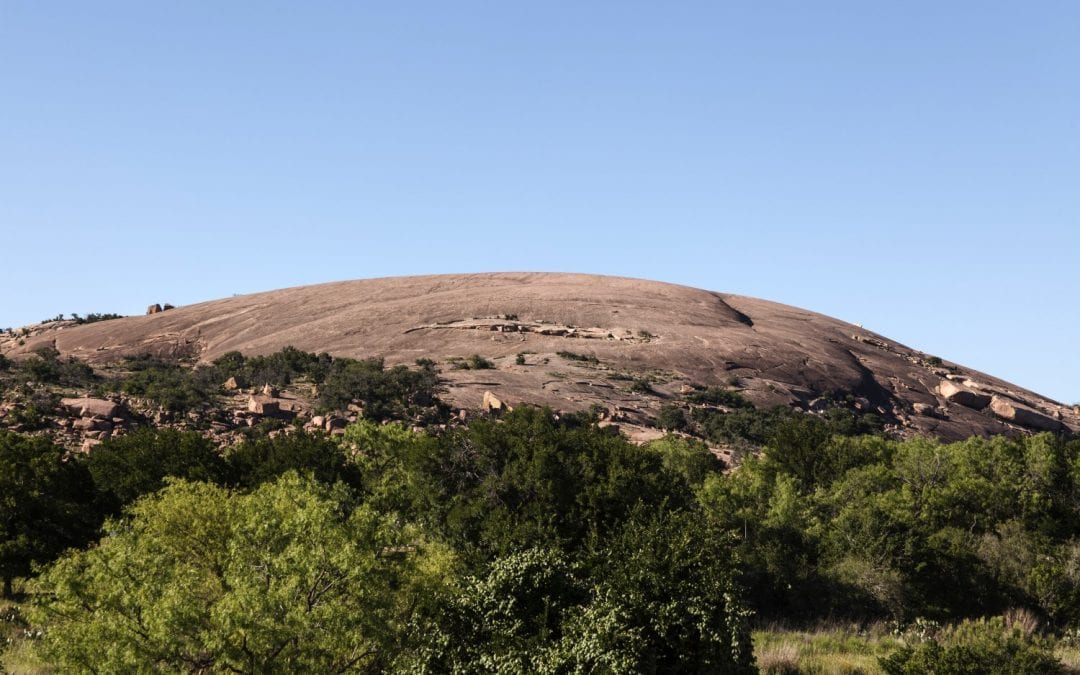 One must see attraction located in the Llano Uplift in Texas is the Enchanted Rock Granite Conservatory. The breathtaking granite dome is the heart of Fredericksburg. It is the largest pink granite rock in the United States. The entire park area covers 640 acres and was designated a Recorded Texas Historic Landmark in 1936 because of its size, the natural pink color, and other unique characteristics of the granite formation.

The large granite creation can be seen from miles around the conservatory area. It is referred to as a granite monadnock by geologists. A monadnock is a hill that is naturally created out of erosional material. The pink granite rock is a result of extensive erosion that occurred on an earlier metamorphic schist.

History of The Enchanted Rock

The history of the granite rock is not solely based on its beauty. First of all, proof that the granite rock and the surrounding area was inhabited by a thriving culture of hunters and gathers about 10,000 to 12,000 years ago is the foundation of its lineage. Geologists take great pride in their collections of Paleo-Indian arrowheads that peppered the grounds of the conservatory.

Furthermore, the staunch history has also been embedded in the belief by the Tonkawa, Apache, and Comache Indians that the granite rock possessed magical powers, hence its name.

There are many tales passed on among the tribes that describe ghost fires that appeared on the granite rock, figures seen walking the dome, loud booming sounds of rock cracking, and mysterious moaning from deep within its granite crevice’s.

Later settlers that visited the granite rock felt that much of this lore was also true after having great success mining for gold in the areas nearby. This area was not known as a promising geological sight for gold, but many experienced the exact opposite.

Many modern-day visitors frequent the granite monument and relish in its beauty. Besides the historical facts and evidence for its thousands and thousands of years of existence, visible proof of long -term life can be seen. Many areas of the surface of the pink granite rock are now the home of various species of lichen and fungi. Ferns have also found their home and staked their territory in the cracks of the massive granite rock. It is no wonder that it was home to many inhabitants over the years because of the abundance of spring water and food plants like pecans. Fernal shrimp are the current occupants of the aquatic pools that adorn the surface of the granite rock. Although the area is quite dry and desolate, signs of life are all over the granite conservatory.

The Enchanted Rock Granite Park is visited by families, hikers, geologists, and rock enthusiasts by the thousands every year.  Unfortunately, the granite conservatory has been victim to several incidences of vandalism over the years. Thankfully there has not been any severe damage due to the strength and durability of the granite sight.

Preserving the granite delight is a must for historians of the area. Those who have come to love and adore the granite formation are quite grateful for the fact that the area was deemed a historic park which has prevented anyone from attempting to extract granite from the dome.

Though we do not source our granite stones from this historic rock, we can provide granite slabs in a wide variety of colors at wholesale pricing!