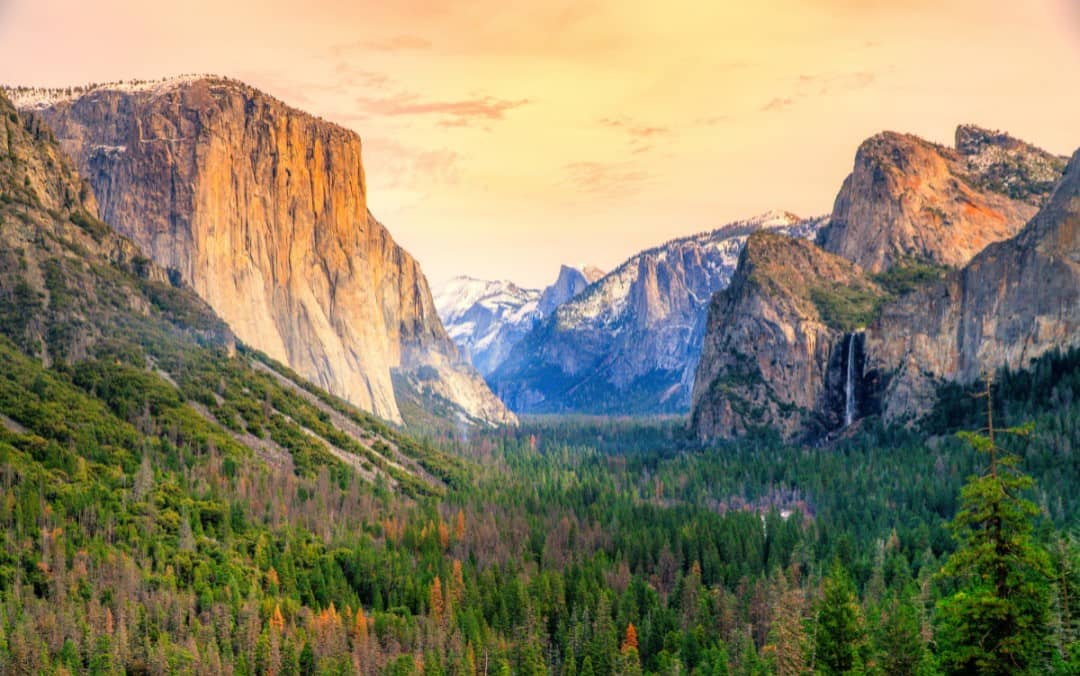 Yosemite National Park in California is home to some of the most iconic granite formations on Earth. Millions of people flock to the gorgeous sites of the Sierra Nevada Mountain range year after year, making sure to stop and admire Yosemite along the way. The park’s geology is dominated almost entirely by granite and some of the most well-known landscapes across the globe.

Granite is an intrusive igneous rock. Its crystallized from molten rock (magma) from miles below Earth’s surface. What makes granite such a unique and interesting stone is its crystals that are formed at these low depths below our feet. It comes in all kinds of colors, patterns, and mineral makeup from around the world. The lighter areas you’ll often see on granite are composed of quartz and feldspar. The darker areas are often biotite and hornblende. Occasionally, you can also find trace amounts of titanite and zircon. There are many different variations of granite and the chemicals that compose it. At Yosemite National Park specifically, granite exists in many forms and from a variety of origins. The composition of the granite can allow specialists to determine how and when it was formed and how long the rock spent at different temperatures.

One of the most notable granite formations at Yosemite National Park is El Capitan. On the southeast facade of the rock you’ll notice varying shades of minerals and surfaces. This is a prime example of the lighter, quartz and feldspar, standing out amongst the dark hornblende. El Capitan alone makes up the majority of the west half of Yosemite.

Yosemite has some of the most unique and awe inspiring rock formations of anywhere in the world. So much of this attention is from the unmistakable Half Dome. Standing nearly 8,800 ft, Half Dome towers over Yosemite Valley and all of its beauty. It got its unique spherical shape from the remains of a solidified magma chamber, also known as a pluton, was exposed by uplift and erosion of overlying rock formations. As these above rocks began to erode, confining pressure on the pluton was released and a process known as exfoliation created the familiar dome shape that we know today. As weathering has occurred over the past some odd centuries, the north facing slope has collapsed giving us the ‘half’ dome.

Another series of granite formations drawing crowds across the world are Cathedral Rocks and Spires. Located on the eastern side of El Capitan, Cathedral Rocks are made up of three main summits– Higher, Middle, and Lower Cathedral Rocks. Next to the summits are the spires. All of these formations are made entirely of granite. If you have ever been lucky enough to visit Yosemite National Park, you’d notice that although much of the rock formations are granite, they look pretty different from one another. Varying environmental conditions at different altitudes and wind-facing slopes allow for a wide spectrum of intensities and climatic conditions wherever you are in the park. In turn, this causes a multitude of chemical reactions and physical variations among the rock formations.

Guarding the Yosemite Valley, and often compared to a tombstone, is Sentinel Rock. Opposite of the magical Yosemite Falls, this granite formation towers over the valley and welcomes visitors from all over. Known for rock climbing and its treacherous hikes, this steep rock is quite the sight and adventure to experience for yourself.

Granite exists all over. We are lucky to live near some of the most beautiful and noteworthy formations to ever exist. It’s crazy to think that your countertops formed such a long time ago, and at one point, looked much like the formations at Yosemite National Park. To get your hands on some of this amazing stone, head to our inventory selection and check out our current availability. We’d love to be a part of your next big renovation, and hope that your countertops blow you away just as much as the granite at Yosemite!