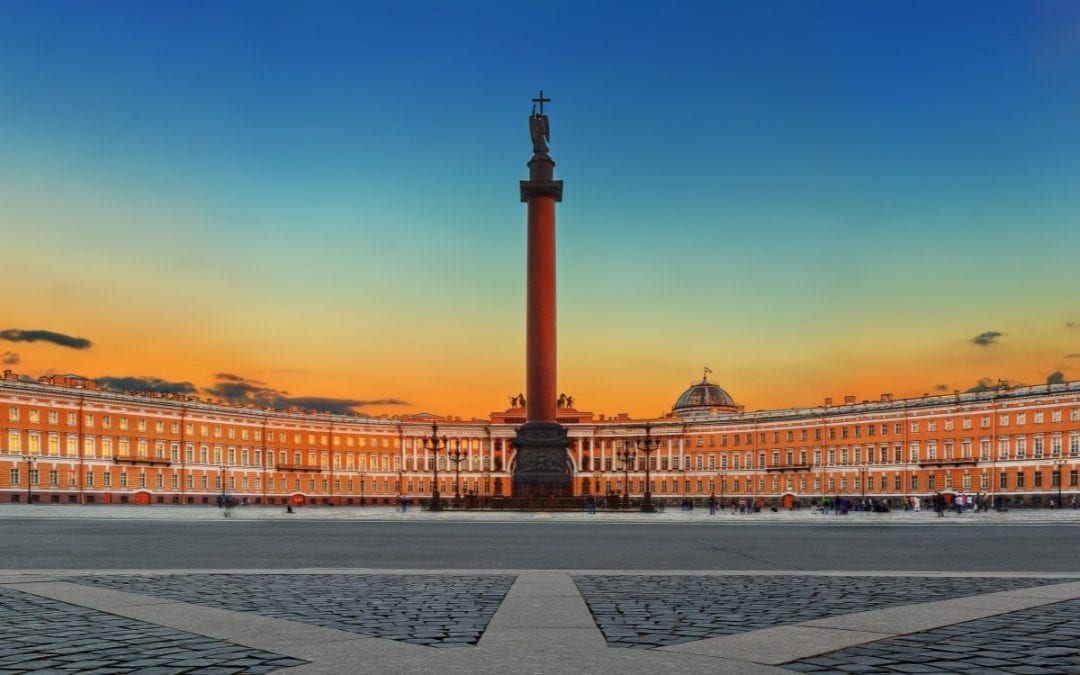 Let’s travel to a new place, a country that we have never gone to on this blog page before. Over the past several months, we have highlighted some of the most famous granite monuments across the world. From staying within the United States, London, and Egypt we have traveled to many places. Russia is one place we haven’t ventured out to, so today we are taking you to Alexander’s Column in the heart of Saint Petersburg, Russia.

Alexander’s Column otherwise known as Alexandrian Column is located in the center of Palace Square in Saint Petersburg. The monument stands as a symbol of the victory that Russia won during the war with Napoleon’s France. Emperor Alexander I, which is whom the column in named after, reigned during 1801-1825.

Palace Square was where this column has marked its home is the central city square to the former Russian Empire. The square is the setting for many different significant events throughout history such as the Bloody Sunday Massacre and The October Revolution in 1917. During the years of 1918- 1944, the square was renamed to the Uritsky Square in remembrance of the assassinated leader. The column sits in the center of the square at 47.5m high and weighing 500 tons.

A French born architect by the name Auguste De Montferrand design the column which was built during the years of 1830 and 1834. Antonio Adamini was a co architect on the project from Switzerland. The column was first unveiled on Alexander of Constantinople’s Day in 1834 on August 30th. The monument, which shows an angel  holding a cross was known to be the tallest monument of its kind, measuring at 47.5 m. The only other monument of its kind that stands higher, is the Monument of Great Fire of London which is a freestanding column just like Alexander Column and measures in at 62 m high.

The column is made of pure red granite which was obtained from Virolahti Finland in 1832. The architects on the job, Montferrand and Adamini, had the granite imported specifically for the construction of the column. The construction of the column was done carefully and precisely because they did not have the availability of modern-day cranes or scaffolding. The construction was lead by William Handyside and his 3,000 men. The Column was complete within hours, which sets records for the production time of any monument.

The pedestal of the column is decorated with intricate detailing that stands as symbols from the glory of victory to the French. The pedestal was sculpted by Giovanni Battista Scotti with the side facing Winter Palace showing images of winged figures sharing words with Alexander I of Russia. The full composition of the pedestal includes many different figures that represent the rivers Neman and Vistula, which are landmarks for events in the war. Some specific images that are depicted are the Shield of Prince Oleg of Novgorod, Alexander Nevsky’s Helmet, Emperor Alexander I Breastplate, and Chainmail of Yermak Timofeyevich. The pedestal stands for Wisdom, Abundance, Justice, Mercy, Peace, and Victory with the dates of 1812, 1813, and 1814 marked throughout the imagery. All of these sketches were done by the architect Montferrand that helped design the column itself.

The column is a popular tourist attraction for those who travel to Saint Petersburg, Russia. It is very centralized in Russia with other tourist attractions and restaurants surrounding it. If you take a trip to Russia, you must add this attraction to your list of things to see. This red granite column looks amazing just in pictures, but imagine seeing it in person, standing at the head of it with the palace in the background. A site to see for any traveler!

Go check out our other articles on Princess Diana’s Memorial in the UK, Mount Rushmore, and Temples in Egypt. We love to escape our day to day and explore the granite wonders of the world. If you have a specific place you want to see us write about, don’t hesitate to reach out! We love to produce content that intrigues our viewers. Enjoy and happy traveling!